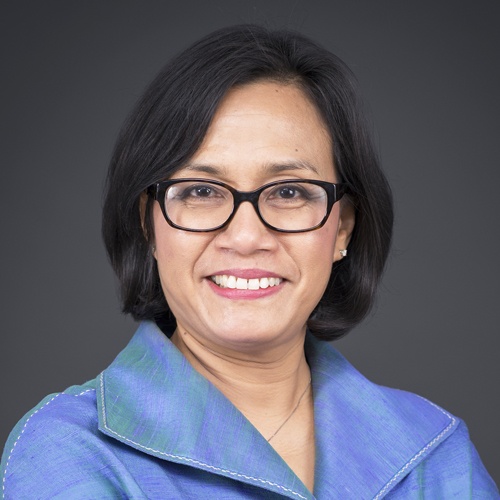 Minister of Finance of Indonesia

Sri Mulyani is an Indonesian economist and current Minister of Finance of the Republic of Indonesia. In 2010 She was appointed as Executive Director of World Bank. She earned her bachelor degree in Economics major from the Universitas Indonesia (1986). Then she continued her study in the University of Illinois Urbana Champaign, United States and earned Master of Science of Policy Economics (1990). In 1992, she earned Ph.D of Economics. This specialist of Monetary Economy and Banking as well as Labor Economics research was chosen to be the Executive Director of International Monetary Fund (IMF) representing 12 countries in the South East Asia (SEA Group) at the beginning of October 2002. Starting from November 1, 2002, she represented 12 member countries of SEA Group at International Monetary Funds. On September 18, 2006, Sri Mulyani was crowned as the best Minister of Finance in Asia by the Emerging Markets in the sidelines of World Bank and IMF’s Annual Session in Singapore. She was also elected as the 23rd world’s most influencing woman from Forbes magazine in 2008 and the 2nd most influencing woman in Indonesia from Globe Asia magazine in October 2007. Sri Mulyani was also awarded as the best Minister of Finance for 2006 from the Euromoney and the best Minister of Finance in Asia by the Emerging Market Forum on the same year. In 2018, the World Government Summit has announced her as the best minister in the world in Dubai. Minister Mulyani would like to share her knowledge and best practices to the participant of IAWP conference through her theme which is women and leadership.